Back in 1999, people in the Fraser Valley were starting to talk. They were concerned about incidents of racism and discrimination, and keen to do something about it. In response, a number of local organizations collaborated to benefit the community by responding to hate and honouring the diversity of local people.
What is now the Fraser Valley Human Dignity Coalition (FVHDC) was developed, and it became one of the first organizations of its kind in BC to respond to critical incidents of discrimination.

Racism Through the Years

Throughout the last 20-plus years the coalition has continually received reports of racism, white supremacy, heterosexism, sexism, Islamophobia, and other forms of discrimination. They work to address these knowing they are both making a difference and dedicating themselves to a job which sadly may not be ‘done’ anytime soon.

Often, world events influence the incidents which occur in our community. After the US terrorist attacks of September 11, 2001 there was a significant rise in local reports of anti-Muslim and Islamophobic incidents. In 2016, when the federal government committed to bringing Government Assisted Refugees to Canada there was increased racism and discrimination towards newcomers, including newly arrived Syrian refugees. Most recently in June 2020, reports increased significantly with heightened awareness of the Black Lives Matter movement.

In 2004, the coalition developed the Abbotsford Community Protocol: A Response to Critical Incidents of Discrimination and Hate Crime. This is repeatedly revised with the latest information on how community members can respond to and report incidents of discrimination and hate crimes. A highlight in the FVHDC’s history is this protocol being adopted as a best-practice tool that other communities use as an example in creating their own community protocols to respond to discrimination, racism and hate crimes.

While the adoption of the Abbotsford Community Protocol was encouraging, one challenge the FVHDC has continually faced is keeping community members informed and encouraging them to report incidents. Limited funding for the coalition means limited activities it can host in the community with member organizations and community partners. Funding has been gratefully received from the provincial government, but there is always more that could be done.

Of course, during the COVID-19 pandemic the ability to reach the community has been especially hampered by the postponement of community events. FVHDC members have transitioned to online meetings and connecting with people via social media. As always, they adapt.

In recent years, to keep meetings relevant and effective they invite guest speakers to share personal experiences with the community. They have also hosted interfaith dialogues and talks in response to discrimination. Most recently, FVHDC members joined a local Black Lives Matter demonstration, with member Harold Rosen of the Abbotsford Interfaith Movement noting that it was “peaceful and friendly, while generating the collective sense that effective action must be taken to remedy systemic injustice.”

In 2019, the FVHDC held the Intersections at the Block event at The Reach Gallery Museum, on the International Day for Elimination of Racism. This event, with over 200 diverse attendees, was key for highlighting young adult Black, Indigenous, People of Colour and immigrant performers. It also featured several community organizations and booths including an Indigenous clothing designer with items for sale; Health Initiative for Men; Queer Life in Colour with Him; UFV’s University Feminist Project, RACE Anti-Racism Network, Amnesty International and World University Service of Canada; the Gurmat Centre with Turban Up; Renovatio Creative Co. which creates and sells accessories that include an Indigenous, feminist perspective; and Archway Community Services. 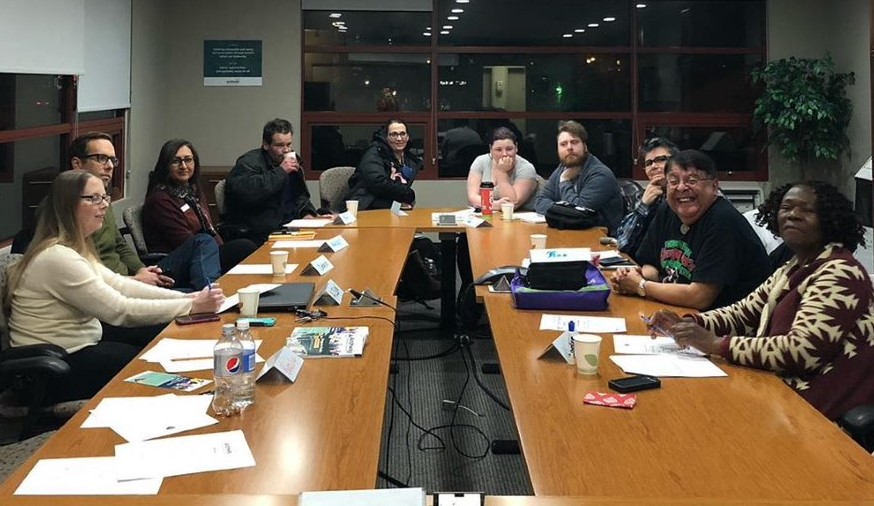 While it can be challenging to work for two decades towards the elimination of racism and discrimination and still see it occur locally and globally, the coalition does so tirelessly. Their enthusiasm for the rights and dignity of all people has never waned. “Even encouraging one person to change their perspective is a cause for celebration,” explained Alison Gutrath, Program Supervisor for the Archway Diversity Education Program who currently co-chairs the coalition.

Other members also share that dedication. Celine Ahodekon, Equity Representative for racialized members in the Union of National Employees, shared her perspective: “Whether it is to apply for a job or to make a volunteering commitment, I always read, first, the mandate of the company or organization. As a human rights and social justice advocate in my Union and in my workplace, I joined The Fraser Valley Human Dignity Coalition because their mandate responds to my values. As human beings, we are all born free and equal in dignity and rights and that is what FVHDC stands and advocates for. By joining FVHDC, I felt like my voice could be heard and together we could work to address issues of racism and hate in the community. Therefore, making Abbotsford a safe and healthy community for all its residents.”

Whether advocating and being an ally for Indigenous rights, Black Lives Matter, the LGBTQ2S+ community or refugees, the Fraser Valley Human Dignity Coalition has played an integral role in our community. They educate on and celebrate diversity in all its forms and manage an important protocol that tracks incidents of racism in our community to report to all levels of government.

Manpreet Grewal, Director of Multicultural and Immigrant Integration at Archway celebrates the coalition’s work, stating, “we are proud that Abbotsford was one of the first communities in BC which got key stakeholders together to address critical issues of racism and bigotry. Archway is strongly committed to its work in building inclusive communities and we’re grateful for all the partners who came to the table to carry on this important work. We also thank the Province of BC for supporting community-based responses through its Organizing Against Racism and Hate initiative in the past, and through the Resilience BC initiative now.”

Ideally, a day would come when the dignity and value of all people is so apparent organizations like the FVHDC are no longer needed. While that may not be the reality, our community is fortunate to have people dedicated to taking up the cause.

Visit the FVHDC website to learn more or to get involved.

As human beings, we are all born free and equal in dignity and rights and that is what FVHDC stands and advocates for. By joining FVHDC, I felt like my voice could be heard and together we could work to address issues of racism and hate in the community.

Have you been a target of racism and/or other forms of discrimination? Have you witnessed any discriminatory activity? We can help direct you to support and resources available in the community.

You will have the option of filling a report to the Government of BC. This report will be prepared by the Diversity Education staff and presented at our FVHDC meeting – you will remain anonymous.

Most racist and discriminatory activities are not recorded and this lack of data unfortunately, leads to problems being unidentified and solutions not being actively sought after in the government level. Help us change this.