A Journey Through the History of Recycling This year, Archway Community Services celebrates 50 years of ‘people helping people.’ Did you know our Recycling Program has been around almost as long? The Abbotsford Mission Recycling Program started 49 years ago, and what was initially a grassroots initiative has become a staple of the community.

In addition to encouraging the community to be a little greener, the Abbotsford Mission Recycling Program also provides people with barriers to employment with meaningful jobs that offer a fair wage and the security that comes with it.

Join us on this journey through the Recycling Program from 1970 to today and meet a few of the people who have made it their second home. 1970: In 1970 the ACS Recycling Program began. It was one of the first of its kind in BC! It started as an opportunity to look after the environment and provide meaningful work for people who were hard to employ, at a time when the idea of recycling was quite innovative. In the early days, recycling was collected in a large truck and driven into Vancouver to be processed. The program grew year after year.

I enjoy coming to work every day in such a diverse environment. No one day is ever the same. Our team is very accepting of each other and everyone’s abilities which adds to the sense of community that is felt amongst staff. I am proud to be a part of a team that not only helps preserve our environment but also contributes to the social good by providing meaningful, local employment. 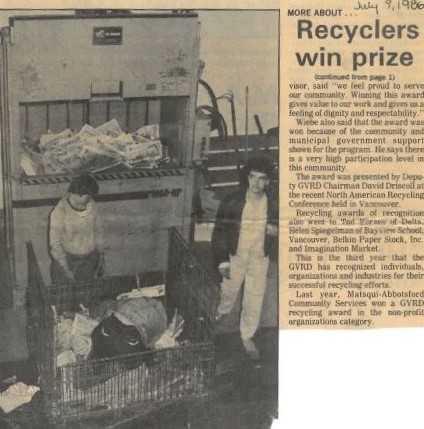 My job is meaningful to me because I realize the impact I can make in a person’s life choices.

1980s: The ACS Recycling Program received the “Recycler of the Year” award from the GVRD for “outstanding, successful, progressive” recycling operations, including success in training and placing workers with disabilities in productive jobs in the community.

1983: The beginning of the partnership between ACS and the Districts of Abbotsford and Matsqui.

1986: The beginning of the partnership between ACS and the District of Mission.

1988: The program was renamed “Abbotsford Mission Recycling Program” to better reflect the communities it served. During that year, the program recycled 1,400 tonnes of material.

1990s: The Recycling Education Program started, providing free environmental education to schools and community groups. In September of 1990, Recycling also moved to its current home on Valley Road in Abbotsford.

1992: A pilot study for recycling curbside collection was run. 1,200 homes in Abbotsford and Mission were surveyed about their recycling habits and results of the pilot study indicated that the blue bag was more effective. During this year, the program recycled 3,500 tonnes of material. 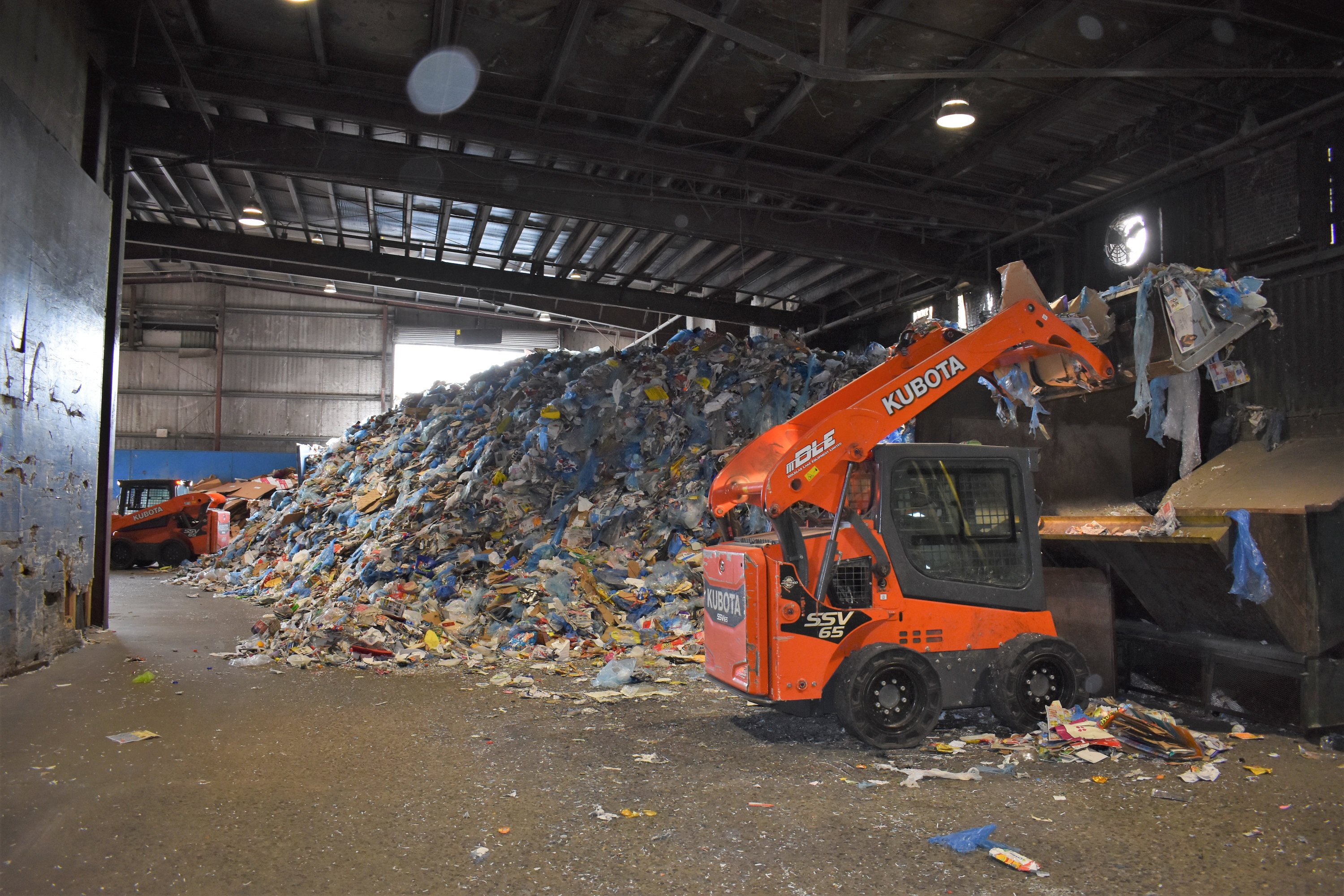 Donn Gains Pride in his Abilities

Donn celebrates 20 years with the Abbotsford Mission Recycling Program in 2019. He feels pride in his ability to run the skid steer which is used to load the blue bags onto the sort line and stays primarily because he loves the people he works with. 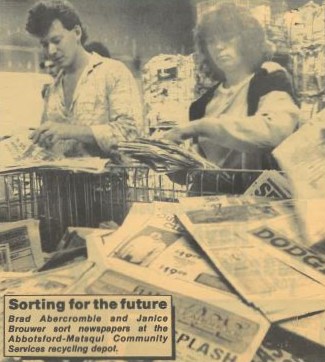 In 1999, Janice came to Abbotsford Mission Recycling looking for a job. She receives disability benefits and is unable to work full time, so Recycling staff developed a part-time employment solution that works for her unique circumstances.

Being an integral part of the Recycling team gives Janice purpose, belonging and a routine. We are delighted that 20 years later, Janice is still a valued member of the Abbotsford Mission Recycling Program.

2003: The Abbotsford Mission Recycling Program receives the Environmental Award from the Abbotsford Chamber of Commerce.

In 2003, Bhajan joined the team at Abbotsford Mission Recycling. She finds the job “messy but rewarding” and appreciates the support she gets from the great team. After 16 years, it’s still the place she wants to be every day.

2005: The Program recycled 12,000 tonnes of material. They also began accepting electronic waste at the public drop-off area, through the Encorp Stewardship Program.

Nancy started at Abbotsford Mission Recycling in 2005. She appreciates the steady income and camaraderie with her coworkers, who feel more like family. Nancy takes pride in her responsibilities and enjoys the opportunity to problem solve. Life has been challenging for Nancy but gaining employment at Abbotsford Mission Recycling helped her get to where she is today, with a more stable life, and her hard work makes her feel like a better person.

2008: Abbotsford Mission Recycling starts accepting hazardous waste at the public drop-off areas as part of the Product Care Stewardship Program. Recyclables are banned from transfer stations, which encourages more use of recycling centres.

2010: ACS is recognized as one of Canada’s Top 50 Greenest Employers. I am quite lucky as Education Coordinator because I get to teach adults and children about recycling and waste reduction. The topic is meaningful in and of itself, and something that I have become quite passionate about as a result of this job.

2017: The Environmental Mind Grind is hosted at Sevenoaks Shopping Centre for the first time. In the same year, the City of Abbotsford and District of Mission become participating members of the Recycle BC Program.

2018: The Recycling Education Program become members of Recycle BC’s Community Champions. They’re awarded a grant because of their community presence, engagement with education and promotion of waste reduction and recycling.