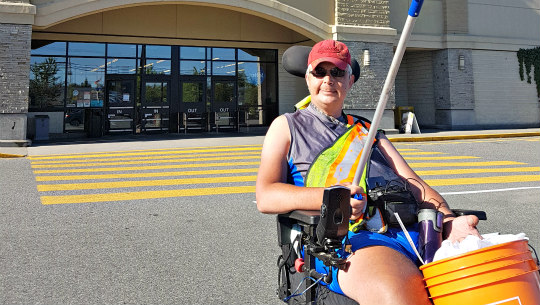 Until 2014, Leslie was a busy fisherman and painter in the northern BC community of Prince Rupert. He was often found on one of his boats, until an accident changed his life. Suddenly, his profession and even his home were no longer accessible to him, and his small community didn’t have the extensive resources he needed.

Learning that the Lower Mainland had more opportunities and resources for disabled people, Leslie relocated to Abbotsford. He connected with Community Living BC, the organization for adults with developmental disabilities, and was referred to the Employing People in Community (EPIC) program at Abbotsford Community Services (ACS).

Going from such physically active jobs, Leslie had a hard time envisioning what kind of job he could get now that he was using a wheelchair and had challenges with verbal communication after his accident.

The team at EPIC were able to support Leslie as he sought new employment and adjusted to his new reality. They assisted with skills training and job opportunities such as wood fabrication, grounds keeping and data entry. EPIC program specialist, Matts Batryn, credits Leslie as being vital to the account setup process for ACS’ Community Living Programs, where he did the data entry for 400+ accounts. He also participates in the EPIC fundraiser car wash every summer and for the last three years has worked at the ACS Food Bank, assisting with mail-out campaigns.

Like many Lower Mainland residents, one aspect of life that Leslie has found challenging is securing affordable and accessible housing. That situation has improved in the last six months, thankfully, since he got a new job at Safeway. There, Leslie is the lot maintenance worker in charge of collecting garbage and keeping the parking area tidy. Finally finding consistent employment has helped him move into a great home-share.

As Leslie’s ability to communicate verbally changed after his accident, the supportive team at EPIC were there to advocate on his behalf. They helped him reach out to prospective employers and assisted through the interview process, ensuring his capability, employability and excellent attention to detail were recognized.

For his part, Leslie says his accident “opened up his eyes more” regarding how people with diverse abilities are perceived in the community. He’s grateful for his new community and the friendship he’s found through EPIC, a program that truly understands all people are capable of finding meaningful work and playing vital roles in society.

“In the blink of an eye, everything was different.”