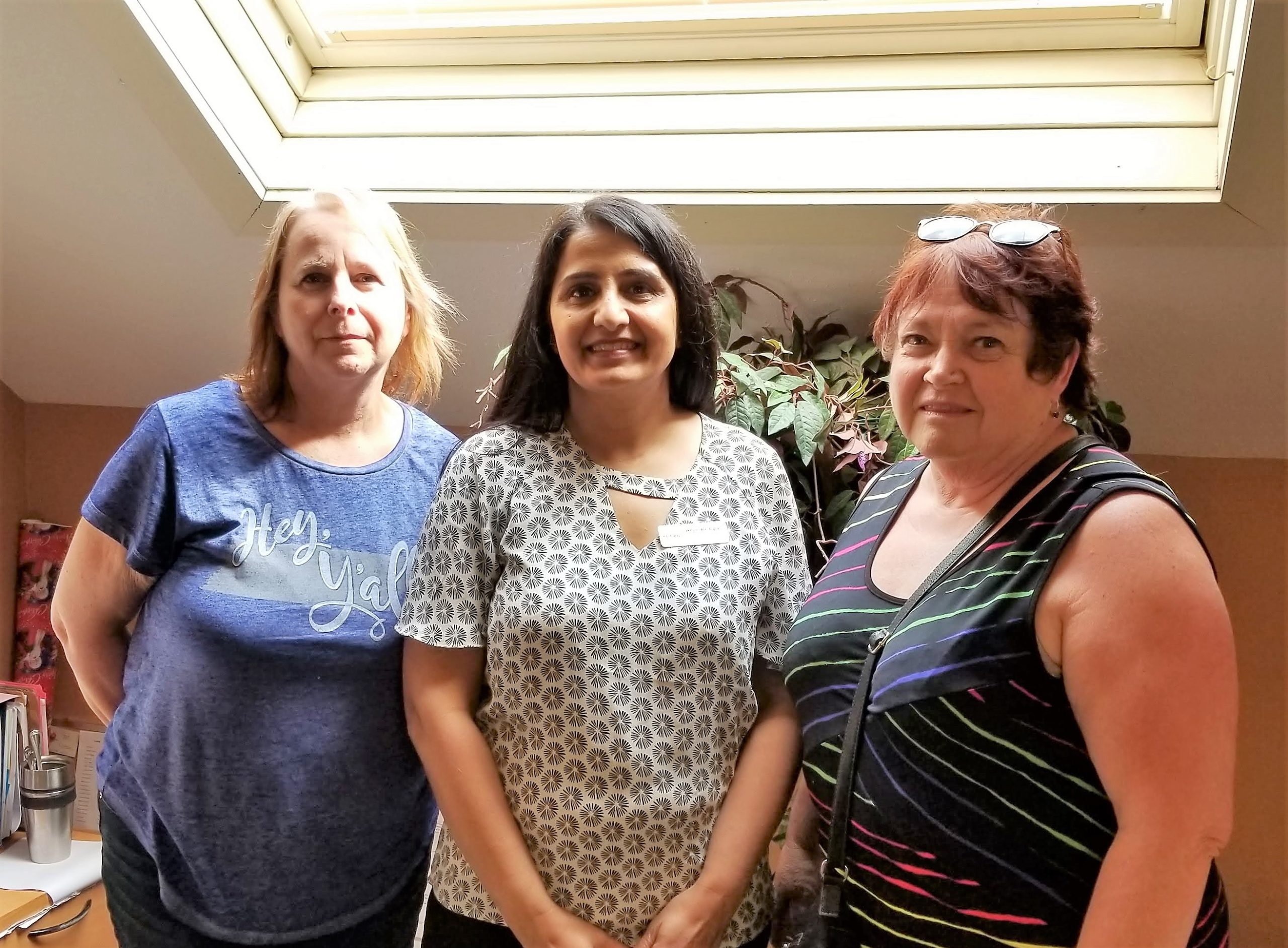 In 1987, Debbie Davidson recognized a need in our community. She was working with the Red Cross Child Abuse Prevention program, visiting local schools to educate students and teachers about childhood sexual abuse – a tough yet very important topic.  Part of her presentations encouraged the students to disclose and seek help.   Unfortunately, there were limited local resources following disclosure.

Debbie connected with our founder Walter Paetkau whom she knew from her work in the community. He offered her some initial funding and training to start a support program.

Debbie was joined by Suzanne Wheeler and Ann Dalton as volunteers and the ESCAP (Education and Support for Childhood Abuse Prevention) program was born. Together, they developed a program which offered support and education to families and individuals dealing with child abuse.

“At first we made it up as we went along, but it worked,” Debbie reflected on being a local pioneer with this initiative.

Debbie and Suzanne weren’t content to just run the ESCAP program – they still saw more need, especially amongst certain members of our community.

One program for teen girls covered some challenging topics and helped those with significant mental health concerns stemming from childhood abuse. For example, the girls who attended were asked to sign a pact to contact program facilitators if they were contemplating suicide.

“Out of anything we did, teen group was one of the biggest successes,” Debbie said. She and Suzanne believed a key factor in that success was the program’s ability to reach out when girls were at their most vulnerable, letting them know someone believed (and believed in) them.

Besides the number of people who were victims of childhood sexual abuse, what surprised Suzanne and Debbie was how so few people in our community were aware of how common it was. The topic was uncomfortable to consider, especially since much of the abuse was familial. Still, they persisted and reached out to local service groups, schools and churches to offer education.

They partnered with well-known educator Meg Hickling to co-facilitate workshops teaching children and families about healthy sexuality, particularly so parents could understand when youth were acting out and when they were exhibiting typical behaviour.

“It was crazy and scary in the beginning,” said Suzanne, “and that’s how we evolved.”

Over the next few years, the growing team began offering similar services regarding childhood sexual abuse in Mission and expanded to address domestic violence as well, recognizing it as an emerging area of concern.

While initially much of their fundraising came from the community, in the late 1980s a government grant was obtained to create Abbotsford’s first Specialized Victims’ Services Program. This once again made our agency a front runner in social services, with the rapport between community services, social workers, police and local crown counsel positioning us as the envy of other cities.

In the early years, programs regarding sexual abuse and domestic violence were usually run by the same people, but as they became more established they split off, and volunteers became paid staff. There was also a significant increase in reporting domestic violence and sexual abuse, which meant programs could hyper-focus on peoples’ specific needs.

In 1990, Debbie left the agency to focus on raising her family. She explained that after years of dealing with such challenging subject matter and hearing so many heart-wrenching stories, it was having a negative effect on her life. “Sometimes we wanted to physically stomp on the files,” she admitted. “Leaving was the hardest decision I ever made, but I knew the program was in good hands with Suzanne and Ann.”

Suzanne moved forward, contributing to several projects. She even travelled to San Diego to study their domestic violence unit, one of the first of its kind in North America. This initial work helped shape Abbotsford’s domestic violence unit and was largely a team effort that included collaborations with Darryl Plecas  and Crown Counsel and research by the University of the Fraser Valley.

In 1992, Lukhvinder Aujla joined the program as a practicum student.  At first what she heard and experienced through her work was shocking and at times she wanted to run away. However, she soon realized how difficult and challenging it was for South Asian women to seek help and as she experienced successes, like helping the first local South Asian woman who reported abuse and attended court, she knew she was in the right place.

In 1993, Suzanne and Lukhvinder identified the need for having a Punjabi-speaking worker in Victim Services.  A proposal was put together for the first Indo-Canadian Specialized Victim Assistance program in the province.  Initially supported as a project for 6 months, it only took three months for the government to decide that it should be funded on an ongoing basis.

In 2003, government support and funding expanded to include another program in Mission. Programs have continued to evolve with so many community partners on board. These include the Abbotsford Police Department and a victim support worker who visit local schools to educate students on abuse and consent.

When Suzanne said goodbye in 2003, Lukhvinder went from a support worker to running the Specialized Victims’ Assistance Program (SVAP). She was juggling the responsibilities of a young family but had such a passion for helping people in need that she couldn’t turn the opportunity down. Over the last 16 years, she has continued to look for ways to improve services for her clients and raise awareness in the community.

In 2010, she worked with the Abbotsford Police Department to create a new partnership and help create the Domestic Violence Unit that deals with high risk files. The unit progressed from one victim service worker and one detective to two victim service workers, two detectives and two Ministry of Children and Family Development (MCFD) social workers. Once a file is identified as high risk the unit works together to keep the victim and her children safe.

Lukhvinder and her department have also partnered with several community groups on the annual Purple Light Nights event, which takes the visible stance that domestic violence has no place in our community.

Today, it’s evident how programs evolved from Debbie’s and Suzanne’s efforts. Lukhvinder and her team refer to their “legacy” as they develop new programs and initiatives. “You look at the problem and it seems so big,” Debbie reflects. “But this is an example of what can happen with just an idea.”

“You look at the problem and it seems so big, but this is an example of what can happen with just an idea.”